The Rise of JM Anderson

Jimmy Anderson has come a long way in the last 10 years. From dodgy barnets to a change in action. The Middle Stump reporter Tom Huelin brings us more on the rise of the Burnley Express... 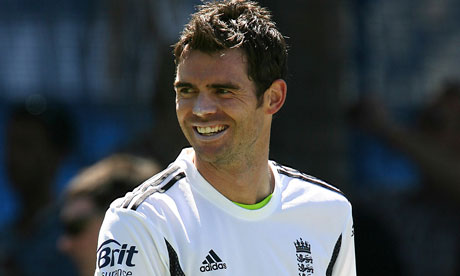 9 years ago, a young Lancastrian with a wild mane of hair that made KP's "badger mullet" look like a short back n' sides burst onto the international scene. His name was James Michael Anderson and his objective was to be the finest fast bowler his country would see for a generation.

Anderson was an instant England success taking a five wicket haul on debut against Zimbabwe at Lords in 2003. He was an archetypal England county cricketer, bowling with swing at a decent lick of pace, taking a shed load of wickets in the process.

Things obviously progressed apace for the Burnley Express until England's coaches decided to meddle with his unconventional bowling action. Duncan Fletcher and then bowling coach Troy Cooley believed his action could cause injury later in his career, but a drastic re-engineering of his technique brought about, ironically, an injury in the shape of a stress fracture to the back.

Anderson suffered a four month injury layoff but with time, reverting back to his old technique and the help of subsequent bowling coach Otis Gibson, now West Indies coach ironically (Alanis Morrisette would love this story...) Anderson re-discovered the swing that had brought him so much success in the past.

Once he had his groove back on of course Anderson was in business, and since that period he's never looked back, having taken 267 wickets for his country to date.

On the doomed 2006 tour of Australia Anderson struggled, conceding 81 runs for every wicket he took. He was unplayable in British conditions, swinging balls around corners at times, but without that movement and assistance on foreign soil the Lancastrian struggled for consistency and found it harder to take wickets.

As a result, Anderson went away and mastered the art of reverse swing, learnt how to bowl with a scrambled seam and worked on bowling a disciplined, probing line outside off stump so that at the very least he could be tight and consistent when away from Blighty.

The first tour for the remodelled James Anderson was Australia 2010 and as we all know now, Anderson blew the opposition away. The Aussies expected more inconsistency from a bowler they had ripped apart four years hence but instead Anderson bowled fantastically well, swinging and moving the ball both ways off the seam and off the pitch to reduce the Australian empire to rubble, taking 24 wickets at a paltry 26 runs apiece in the process.

In the lead up to the West Indies series that started at Lord’s earlier this month, Anderson was crowned ECB Cricketer of the Year, richly deserved I’m sure you will agree. Since then he has lead a familiar looking England attack with customary poise and composure, taking 9 wickets at 26.8.

He’s also had the odd angry word with West Indian batsman Marlon Samuels, but with another series win under his belt, the Burnley Express is most certainly still England’s number one.