It was billed as the battle of the bowling attacks; Steyn, Morkel and Philander against Anderson, Broad and Bresnan. Who came out on top? The batsmen of course! 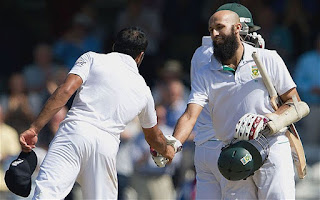 In short, South Africa scored about a million runs. England failed to score as many runs in two innings as the Proteas racked up in their one (massive) knock. God, England’s second innings fell short of Hashim Amla’s runs alone.
Amla, the man who looks like he has his head on upside down, batted with class and made scoring a test match triple hundred look incredibly easy. It was the 26th triple century in Test history, the first by a South African, the seventh in England and the first in this country since Graham Gooch piled up 333 against India at the home of cricket in 1990. Add to this the fact that Amla did not touch any food or drink in the middle as he observed Ramadam and you can see how big a feat it was.
Rumours that Amla went out to bat clean shaven have not been confirmed!
Jacques Kallis also amassed a mountain of runs. His unbeaten 182 was his 43rd Test century, which leaves him second on the all-time list. The South Africans declared on 637 for 2 with a significant lead after England’s 385 (Cook getting 115).
Mr Ravinder Bopara struggled with the bat for England but they have to stick with him for the remainder of the season. Bopara and Pieterson played a couple of flimsy shots in both innings and Strauss and Prior got caught sweeping in the second. The sweep is an awful shot in my opinion, it should be used, if used at all, in the shortest formats of the game.
How badly did England bowl? Well… Graeme Swann looked bereft of any sort of an idea. He went for 151 without taking a wicket, the most he has gone for without taking a scalp. He also sent down the most overs in an innings – 52.
Stuart Broad was for me the biggest disappointment. He is a man who can get something out nothing. The Oval track was awful but the handsome bastard bowled within himself, trying to nick it back off the seam and trying to get some hint of swing. Not once did he bend his back and give it a proper go. Underprepared? England will ‘rest’ players!
Anderson bowled well, unlucky but the best of a bad bunch. Timothy Bresnan does a lot of donkey work and Eeyore adds some security to the batting order but surely it must be time for Finn. It has to be. Bresnan knows Headingley like the back of his humongous hands though, so should Broad be looking over his shoulder?
1-0 South Africa