County Championship 2012 in Stats (Division One)

The 2012 County Championship season has been and gone. We’ve had low scores, high scores, wickets galore and a lot of rain! Players have been dropped, moved clubs mid-season and we’ve even seen a cameo from KP. So who were the men in the runs, the wicket takers and top stumpers? We take a look… 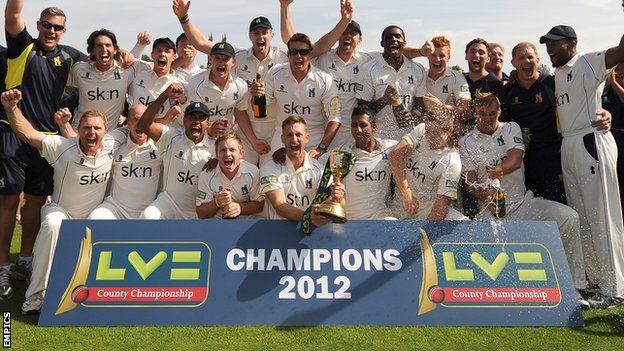 Champions Warwickshire racked up the highest innings score of the season. A century from captain Jim Troughton and an unbeaten 118 from number eight Chris Woakes, as well as a handy 76 from number 10 Jeetan Patel saw them to 571 in the first knock against Surrey in July. Warwickshire got above 500 on four occasion, a sign of champions. Notts and Somerset were the only other counties to do so.

KP got the top score of the season with 234* against Lancashire on a postage stamp in Guildford. Compton was the only other man to get a double ton. Riki Wessels was one away against Sussex at Hove in May.

The big hitter award goes to KP, 16 sixes in four games (8 coming in the game at Guildford) showed that he had anger that needed hitting out! Rikki Clarke smashed his way to 12 maximums with Craig Kieswetter one behind on 11. Mullaney, Trego and Blackwell also scraped in to double figures.

Andre Adams was the only man to have a strike rate above 100. His 151 runs came at just over a run a ball.

Compton topped the centuries chart with four. Clarke, Chopra, Rogers, Chris Nash, James Hildreth and Michael Lumb all got three. Ashwell Prince got to 50 on 10 occasions, only converting in to a century twice! Chris Read only got one century after passing 50 nine times.

The award that nobody wants is the most ducks. Harry Gurney, Ben Scott and Jade Dernbach share the honour with six blobs each!

There were two nine-wicket-hauls, Onions taking 9-67 against Nottinghamshire and Abdur Rehman taking 9-65 against Worcs for Somerset. Stuart Meaker also took 8 wickets for Surrey against Somerset at the Oval.

Graeme Onions and Keith Barker share the most five-wicket-hauls with five apiece although I’m giving the Durham man the title as he got 3 ten-wicket-hauls.

The award no bowler wants is the most conceded runs in an innings. This season the award goes to Lancashire’s Simon Kerrigan who took 3-178 against Warwickshire in an innings where Chopra and Clarke both tonned up on their way to 557/6. Gareth Keedy was the second most expensive bowler all season in the same innings with 1/162. Kerrigan however must have been eying up this accolade as he again went for loads, this time taking 1/152 against KP and the Surrey boys on a batting bully’s paradise down in Guildford.

John Simpson was the top keeper for dismissals, the Middlesex gloveman got rid of 47 (45 catches, 2 stumpings). Worcestershire’s Ben Scott got the most stumpings with five.

The bucket hands belong to Michael Yardy, the former England One Day man got an impressive 32 catches. Not far behind were Rikki Clarke (29) and the ever reliable Marcus Trescothick with 28 in just 9 games!

They were your winners and losers guys! Division 2 to follow shortly…