Alastair Cook - The Truth Is Out There

Tired of the same old guff about Alastair Cook? Well, guest blogger for The Middle Stump Jeff Thomas thinks he may have found a new angle to explain the England Captain's unprecedented success... 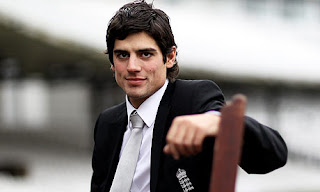 Having led England to an historic series win in India at the first time of asking, and smashing more records than Christian fundamentalists outside a Dixie Chicks gig in the process, there’s not really much you can say about Alastair Cook that hasn’t already been reiterated many times over.

We know all the stats: the most this, the consecutive that, the fastest to this, the youngest to that, 23 of them, 7,000 of those, the facts and figures have been repeated so oft in recent weeks that they’ve become like the omnipresent numbers in HBO’s Lost that inescapably rattled around your head for years like a perpetual waterboarding from Carol Vorderman.

Then there’s the backstory: the St Paul’s choir, the move to Bedford school, the hundred he scored against his own first XI, the GCSE’s, the A-levels, the piano playing, the saxophone, the tractor he left his wedding in, we seem to know more about Alastair Cook’s life than our own.

But when it comes to the England captain, perhaps the most echoed and hackneyed line of all is in regard to the young man’s dysfunctional sweat glands. Now I used to think, “He doesn’t perspire. We know. We’ve known for years. Stop banging on about it. Get over it. Move on.”

But having recently revisited Steven Spielberg’s much underrated 2001 Sci-fi drama A.I. Artificial Intelligence and remembering I had a degree in Sport & Exercise Science I started to think a little more deeply about this rather sinister quirk of the thermoregulatory system.

Humans have to sweat, how else is the surface of the skin cooled, and body temperature controlled? Surely not sweating is a huge disadvantage in hot climes. Hmm?

This led me to question some of Alastair Cook’s other bodily functions, do his lungs actually take in oxygen, does his heart pump blood around his body and does he ever take a shit during lunch or tea? It’s hard to say with any real certainty.

Or, like Haley Joel Osment’s character ‘David’, does the evidence suggest he is in fact an advanced humanoid capable of emulating thoughts and emotions having been created by Cybertronics of New Jersey? Was he designed to resemble a human and to display love for its owners and score thousands and thousands of runs for England in Test cricket? Ok that last bit wasn’t in the film but you see where I’m going with this…

Think about it, the chiseled jaw line, the deep set eyes, the seemingly preordained career path, it does all seem a little too good to be true. Perhaps the BCCI should have spent less time worrying about the inclusion of DRS and raised the issue of whether or not England had a Mecha robot opening the batting and captaining the side? Well, more fool them...

Unlike in the film, let’s just hope Alastair (if that is his real name) doesn’t run off with a male prostitute robot named Gigolo Joe – or indeed Jude Law – before he’s broken all of Sachin’s records.