Are Australia in disarray?

“Mike Hussey is at the centre of a rumour doing the rounds by email, and published in of all places a financial gossip column on Thursday, that he and Michael Clarke had a spectacular falling out after his farewell Test at the SCG. According to the scuttlebutt, Hussey and Clarke had been split over where post-match celebrations should be held - Mr Cricket wanted them in the dressing room and then the hotel, but the captain preferred a planned evening on James Packer's super yacht Seahorse. Hussey, it was claimed, boycotted the boat ride in protest, having also just been surprisingly left out of the one-day squad. He was joined by two other players, the email said.” This was from Friday’s Sydney Herald. 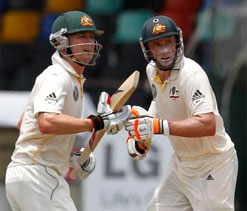 “I caught up with my mate (relation of Mike Hussey) and got some pretty interesting info ok, there has been a lot of talk around the attitude of Michael Clarke for years, he is a selfish wanker.

Hussey apparently was promised at a minimum two one dayers in the ODI series, in Perth, he was promised this on the back of "best available" talk. It is probably worth mentioning that a lot of the players are a bit scared of Clarke in terms of the fact that he is a selector now, so they avoid trying to piss him off. At some point Clarke called Hussey over (after the end of play) and asked if he could have a word. In this discussion he told Hussey that he wouldn’t be playing because they were "looking to the future" Hussey asked about best available side and all that shit and Clarke said "you can have a lap of honour before we play the ODI in Perth" to which Hussey told him to shove his lap up his arse. Cricket Australia didn’t want to announce the axing but certain members of the Hussey camp "accidentally" dropped the hint to journos around the country. Clarke wasn’t happy about this and I guess it set the tone for the following couple of days (this was after play day 3 from memory). So then the day before the game finished Hussey was asked by Clarke what he wanted to do for his last game, and he said that he wanted to just sit in the change rooms and get pissed with the team and the entire support staff. Michael Clarke then proceeded the following day to organise to go on James Packers massive boat (which they could do any time for the next 3 days) but he wanted to go that evening the test ended.

As a side note they all get pretty expensive retirement gifts from the team, and Hussey (being in charge of the song) will change the iPod to John Williamson’s "true blue" this is when the team knows to get in a huddle to sing the team song. Anyway, someone turns the music off, and Hussey started complaining that someone had fucked the iPod up... next minute John Williamson walks in singing "true blue"... thought that was pretty cool.

So anyway, Clarke tried to turn it and say "I did this for you mike" (the boat) when he already knew what Hussey wanted to do, didn't want to go to the boat he wanted to get pissed in the change rooms. So at the end of the day everyone is in the change room drinking, Clarke had left early because he wanted to go on the boat, some players (including Warner) left as well. When it was time to leave for the boat a couple of players asked mike if he was coming, and mike was like "nah go have fun, I will stay and celebrate with my family and the support staff".

Nathan Lyon (Hussey’s best friend in the team) said "fuck that if Huss isn't going I’m not going" then Watto (Shane Watson) said the same. As vice captain that meant a lot because the players came back to the room and were going to bail on the boat, because they weren't worried as much about Clarke losing it.

So the next minute they get word that Clarke has made the boat an "Official Cricket Australia function" which means the players get in trouble for not attending. This forced a lot of the players to leave, Siddle and Lyon and the support staff were the only ones left from what I understand, absolutely petty and shit form from Clarke considering that they could have gone on the boat the following night.

So in the end Hussey, his family and the support staff stayed in the rooms. Hussey then woke up with a voicemail from Clarke which abused the shit out of him for leaking to the media and about how he didn’t go on the boat with the players. Then Clarke put David Warner on the phone, who abused the shit out of him as well. Hussey just took it in his stride and didn’t respond, and the next morning in the lobby of the hotel Clarke wouldn’t even look at him. Hussey apparently said "Hey Clarkey, one day you'll know" and that was the last words they had exchanged. Mike was referring to the fact that Clarke is a selfish fucker, and can’t understand why Hussey is retiring (young family etc)”

Now we know that this could be absolute bollocks but it doesn't half make you think now does it? Roll on the Ashes, we say!