During last summer we spoke with a young man who was trying to make his name in County cricket playing in the , since then Scott Phillips has come a long way. Last week Phillips signed a deal that will see him cross over the and turn out for Gloucestershire this season. 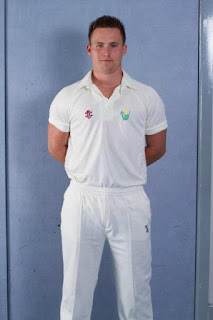 Phillips, a fast bowler, was clocked at 84mph as a 16 year old and friend of ours David Brown, a team mate of Phillips at Mumbles, told us that he was ‘very raw but when he gets it right he is a handful!’

I first heard about the Llanelli pace man while opening the batting in a league game in with my younger brother Deano. The opposition quicky dug one in and wrapped me on my glove in front of my face. I wandered down the track for a bit of gardening and to get my bearings and explained to my brother that it was pretty quick. ‘Yeh he’s got some wheels but he’s no Scott Phillips’ came the reply.

Phillips would have been 15 at the time. He was right too, a few weeks later I went to watch my brother at his nets and saw this young man with shoulders the size of a small cottage running in and hurting people!

So how come the part time DJ and lover of low cut t-shirts and vests from has signed for Gloucestershire?

They had already approached Phillips two years ago after a game for Mumbles in the Premier but he chose to sign for Glamorgan and take his place in the Academy.

After just the one second eleven game last season Phillips was told that he was now in the hands of the University (Cardiff MCCU) and that he would have the opportunity of some more second eleven games this season. Gloucestershire, after finding out that Glamorgan had not offered him anything, offered him an academy and professional summer contract.

It was not just Gloucestershire that were interested: ‘I also got offered to go trial at Kent and at Essex and was shown some interest by Middlesex also but Kent and Essex wanted to see me in April which I thought was too long for me to keep Gloucestershire waiting so I accepted their offer.’ Phillips explained.

He added: ‘I enjoyed my season with Glamorgan last year and I would like to thank Steve Watkin for helping me in all the one-to-one sessions I had with him but also I would like to thank Darren Thomas, who has been my coach since I first got in the Welsh team, for the on-going coaching and monitoring of myself.’

It certainly will be a busy summer for Phillips as he has Cardiff MCCU, Unicorns, , Mumbles and Gloucestershire to take wickets for this year as well as pursuing his other dream of becoming a disc-jockey!