This series had been tough for me, I'll be honest. England are not performing like the second best side in the world and New Zealand are fooling us all with their efforts with bat and ball. My problem is not actually with the England team although I've had more than enough of Stuart Broad's hissy fits. what annoys me more than anything else in the whole wide world (with exception of a broken hair band) are the SKY TV commentators. 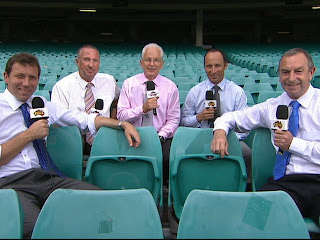 I'm going to start with Nick Knight or Nick fucking Knight as he is known in my house. Now don't get me wrong, he comes out with the odd bit of sense but usually it's sandwiched between a whole load of shit.

The problem I have is that I just can't trust him. If Nick Knight knocked on my door I have a sneaky suspicion I may end up with double glazing. The way he looks deep into the camera almost as if he is addressing me personally is worrying. I can't help but think he is lying to me. I wouldn't be surprised if he took my sister out and then never called her again.

I may have trust issues but another man I struggle to believe is Ian Botham. A legend of a cricketer and a fine, fine commentator. My problem? He wears short sleeve shirts. I get by in life with pretty much three rules:

- Never trust a man who folds his arms

Bob Willis is a grumpy git. Have you ever been on a bus and it's late, you are about to pull away and some geriatric runs along after you and gets on. "Oh perfect timing" (well its not perfect fucking timing is it?) and then proceeds to tell the bus driver all about his day and his gout. This man is Bob Willis. 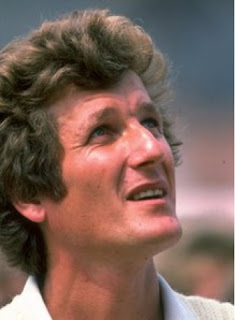 I'm dissapointed to hear that Nassar Hussain and David Gower are being rested. I hope Nick Knight gets rested soon, he must have a conference to attend? Gower is a smooth operator, a man that you wouldn't be too pissed off if he took your gran to bingo. 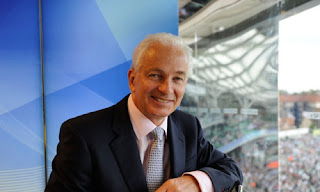 One man who would give me the raging hump if he took my gran out to Mecca would be Bumble. Why couldn't he take me???

A man who can be just as great as David Gower is Ian Ward. As an anchorman, not a batsman. He seems at home in front of the camera with that tidy little quiff of his grilling his guests who have been fairly decent.

Paul Collingwood should be one of the main eventers and so should Mark Butcher. Steve Harmison maybe, if I could understand a single word he was saying. I like Robert Croft and Dominic Cork too, both men are former captains, England internationals and are from an era when things were not all rosey for England.


One man who I would not have is Gus Fraser. He looked on edge last night, almost as if he had a barney with the Missus, chucked on a novelty tie and went to work with the drive and enthusiasm of Bob Willis with a bad back. He has the look of a man who would quite happily flog you a dodgy motor.

Who have I missed out? Who would you like to see in a darkened studio at 4am talking to Ian Ward, who would be doing your pitch reports?