The Middle Stump on location

After the riotous launch of Cricket Banter  last week, the boys from the Middle Stump are hitting the road for the summer season. 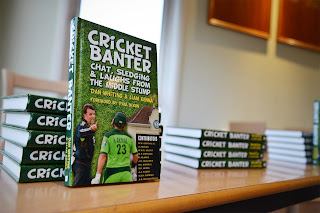 Firstly, co-editor Dan and chief correspondent Thorpster will be hitting the English seasons first day of Test cricket at Lords v New Zealand on 16th May. Come rain or shine we'll be on the lash all day. If any of our followers are there on the 16th, and would like to meet up for a beer, we'll be happy to oblige so just give us a tweet?

Following "the success" of the Cricket Banter's official launch also now known as #redchunder as that was the colour of the toilet floor, a second book signing is now in the diary for Friday 12th July at the SWALEC in Cardiff, with further details to be confirmed. Liam, Dan and the Thorpster look like they will all be in attendance. If any of our followers from Wales and the West are up for it, no doubt more "antics" will ensue with a good night had by all.

As you all know from the site and the book we are County Cricket Crazy (CCC). So in 2013 we're looking to get on the road and enjoy the "hospitality" at as many of the county grounds extolled about in Cricket Banter as possible.

So if any of you county fans fancy hosting us at your local ground at any time in 2013 give us a tweet @themiddlestump or follow us on Facebook and drop us a message there? We don't mind which format of the county game it is as long as your up for a laugh, a few beers and of course most importantly lashings of cricket banter!