The wait is over; the greatest match in cricket (outside of India of course) is underway. 'The biggest game for the smallest trophy' as it is billed on that annoying advert that comes on the radio more often than Stuart Broad's physio. Australia are here and they will do whatever they can to take that little urn home on the boat come the end of August.

Australia have had a rough time of it recently, their rugby team got an absolute hiding on Saturday and their cricketers have lost a coach and David Warner but on the first day it was not all doom and gloom for the visitors.

Alistair Cook won the toss and elected to bat and it could be said that was the best an English batsman had done all day. With the ball swinging around like the Krankies, Cook succumbed to Siddle early on for 13, bringing in Trott to partner fifteen-year-old Joe Root. Yes, Root is back at the top of the order where he feels most comfortable, with Nick Compton sitting in the dressing room at Somerset wondering what went wrong.

The rest quite simply failed. The ginger assassin - Peter Siddle - took a Michelle with Ian Bell yet again getting a pretty 25 after KP went for 14. Someone mentioned on Twitter that watching the two meet by the gate was like watching the Rolling Stones and staying behind to watch the Spice Girls!

Bairstow dug in like a true Yorkshireman before falling in the 30's. The impressive Aussie attack have seemed to work out that he plays with a very strong bottom hand and tries to whip everything through mid wicket.

England finished with a measly 215. The top order are very confident in each other but maybe too much. They seem to be very reliant on someone digging them out of a hole and that can only be a bad thing.

Credit must go to Australia. Their fans, who come out of the woodwork quicker than a Tottenham fan around November, have always backed their bowling attack and I believe it is just as good as ours. It is not, however, better. Starc and Pattinson bowled smartly to back up Siddle.

Australia started their reply with two men relatively new to the top order. Buck Rogers playing in only his second test - two decades after his first - and Shane Watson has spent most of the last couple of years either injured or hiding in the middle order, wishing he was injured.

After a couple of meaty blows, Watson nicked off to Root off Finn and Ed Cowan - batting in his first Ashes match - nicked off the very next ball to leave Australia 19 for two, in a spot of bother and Finn on a hat trick. Your bowling attack can be as good as you like. You must back it up with runs. 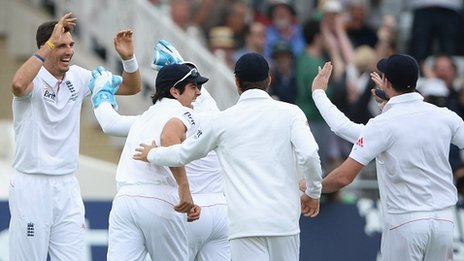 Anderson then passed Fred Trueman with a beautiful delivery to get the Australian captain for a blob and leave Australia 22 for three. Rogers and Smith brought some solidity to the innings although neither looked set. Anderson trapped Rogers and even DRS was an Englishman.

With Stuart Broad off the field with a suspected broken vagina, it was down to Finn and Anderson to get England to the close of play, with a handful of overs from Swann. Some ugly batting from Smith and Hughes saw Australia get to stumps still four down.

14 wickets fell on day one of the first Ashes Test. I have a feeling tomorrow is going to be a fine day. Smith is trying to score quickly and Hughes is out of his depth. Two early wickets in the morning and England can find themselves in a handsome position, unlike Steve Smith.