The Squad to South Africa

Today the squad to South Africa was announced. With the Test match at Kingsmead in Durban kicking things off on Boxing Day we are only just a month away from the series. With surprising omissions and one or two inclusions the squad has caused controversy and debate on social media all day. Here we look at the good, bad and the ugly within the England team.

A trip to the 'Port

Last Thursday I put on the third Pushing the Boundaries show at Newport Cricket Club with four Glamorgan players. This time it was for the Tom Maynard Trust as well as Melanoma UK and all in all, a good time was had by all. Matt Maynard, Robert Croft, Mike Powell and Mark Wallace gave up their free time to be a part of the show, and in Croft's case he became the star...but more about that later.

Tomorrow night Newport will see the biggest sporting event since the Ryder Cup and with four legends of Glamorgan cricket in attendance, Barack Obama's visit a couple of years ago to the Gwent city, will look like small fry compared to what we have going on! 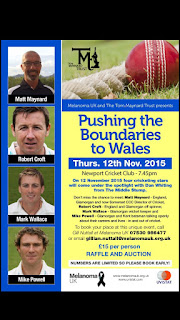 And so it came. Ben Stokes, the charger of Sharjah went for a wander and was stumped. Pakistan won the series 2-0 and England have some serious thinking to do. The biggest selling English newspaper in this part of the world might be called The Gulf Today but despite England battling hard, the gulf today between these two teams is vast. Read on, and let Theresa May have full access to your browsing history as we review the story of the third Test match from the UAE between Pakistan and England.