Just over half way through the group stages and the 2019 Cricket World Cup is starting to take shape. Or it would have taken more shape if it hadn't pissed down with rain all week. The UK has been wetter than a mermaid's gusset this last week, which has kept the group tighter than Phil Tufnell at the bar. There have been empty seats, Channel 4 has decided to show games at times that an insomniac would baulk at and the weather in June, has been about as much fun as watching an episode of Terry and June. Despite this, we have had some brilliant moments so far...Here, in association with The London Fields Brewery is The Middle Stump Guide to the World Cup so far.

Leaked Chapter from the Exhaustive Guide to Club Cricket

During the Cricket World Cup, I am offering copies of my latest book, The Exhaustive Guide to Club Cricket for just £6.99, whilst England are in the competition, or until they win it (you may have to hurry after today). In the meantime, here is one of the chapters from the book for free. Read on and enjoy the differences between the professionals and us clubbies. You can get your 'split webbing hands' on a copy by clicking this link here... 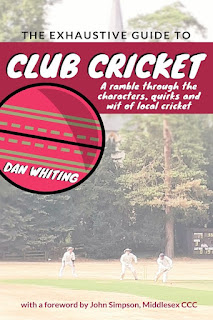 Spoof social media accounts and cricket are nothing new. Kevin Pietersen was the butt of some jokes who were friends of his team mates a few years ago and some would say it was the initial lighting of the fuse that caused his departure from the England team. Some are just boring and have had their day, whilst the likes of Fred Boycott have kept us entertained for years. In one cricket league in the Home Counties, the news on the grapevine throughout clubs is of other Twitter accounts mocking other clubs. So much so, that the league have issued a statement warning the protagonists. Not only that, they have issued a statement warning anyone liking their tweets or even following them that they will be subjected to sanctions as of June 1st. Is this now taking their duties too far?