Cricket players in the days of yonder advertised some bizarre things. With player agents probably not as aware of their client's profile as their modern day counterparts, the adverts below seem to have raised a chuckle. Not sure if this is due to the often awful product they are endorsing, or the general retro feel of the not-so-slick marketing departments of the time. Read on below to see how yesterday's cricketers earned some extra corn...

Beefy, pictured here exiting the Grace Gates at Lord's, before no doubt getting caught in the awful one way system around Swiss Cottage as he ventured north, was the darling of the Swedish car manufacturer. Allegedly, he wrote off two in one day. I'm not sure if this was good publicity or said something about the handling of  the automobile around corners.

"The worst car I ever had - it cost me money" was the response of my childhood hero when this was mentioned on Twitter. Here Lubo swans around Grace Road, before the stickers that adorned his name were re-jigged by team mates to make an unrepeatable anagram. It might have cost him money but probably not as much as the car that ended up in the bottom of a frozen lake or even a trip on a Tiger Moth aeroplane. 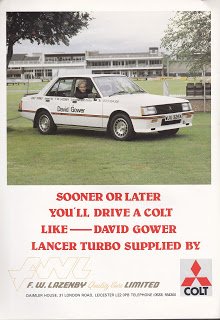 Here is the Aussie skipper advertising the weakest piss water I have ever had the misfortune to purchase from a public house - and I have drunk Hofmeister and Carling Black Label. I'm not saying this import was flat but I reckon a Day Three deck at the Adelaide Oval had more life in it. Saying that, if it had more bounce in it, no doubt on this tour Andrew Hilditch would have hooked it.

We all wanted a pair of these gloves in the late 70's, also modelled by Beefy for a while. Here the England skipper tops up his pre-Packer pension by getting almost naked, shortly before the manufacturer went bust. I'm not really sure Greigy should have been talking about being sapped of energy whilst at the crease all day. Maybe, the marketing department of Viagra missed a trick here. Sadly, Greig met the real St Peter in 2012, if you believe that God has a bouncer on the gates of heaven.

Here Paddles sups away on a can of beer that no one has ever heard of. Not only that but he is doing it in his whites, with one glove on, way before the days of Michael Jackson made it erm, not so cool. I don't know about you but I always have a few beers before I go into bat, with one glove on. Hadlee later received a knighthood, no doubt for his services to drinking obscure lager.

Here is England's finest purveyor of a forward defensive, showing his shot with a marketing department not having a clue how to link this to jumping on a plane to Hong Kong. Boycs has his head down, over the ball, ironically in a similar pose to those who flew into the old Hong Kong airport who would have to adopt the brace position, as the pilot weaved between the flats.

Here is Beefy showing that the correlation between athletes and stuffing your lungs full of unfiltered cigar smoke knew no bounds back in the day. "Mind my Hamlet whilst I just whack Lillee and Co around Headingley" was his quote back in 1981. Probably.

We think this is Ian Chappell endorsing a game that young Australian kids played in their Baggy Green caps. Ironically, if you jiggled the chute around as the ball was going down it, the ball would move both ways as it travelled towards the batsman. No doubt this was enjoyed by a young Steve Smith, David Warner and Cameron Bancroft, sand paper at the ready.

Here is Nottingham's very own poster boy advertising a pair of Nottingham's finest hand protection, as Derek Randall japes around with gloves. Brilliant in the field, Arkle as he was known, certainly didn't need gloves whilst patrolling mid wicket or cover. He didn't even need them to do his handstands to entertain the crowd either.

By using this hair product, you too can go out and score 3,000 runs in a season for Middlesex and then pop the goals in for Arsenal. Why not? It worked for Dennis Compton, so the marketing dudes at Brylcreem would suggest.